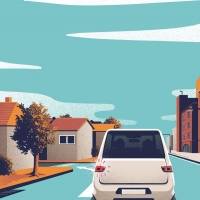 Canada’s National Dream, the modern edition, began in 1953. That was the year Don Mills, the country’s first large-scale, fully planned suburb, began selling affordable, ranch-style homes north of Toronto. Immediately, middle-class Canadian families yearning for their own bit of heaven – a yard, a garage and room for the children to play – began packing their bags for the burbs.

And almost as quickly, folks who claimed to know better were complaining about it. In 1954, a national report by Maclean’s titled Why Live in the Suburbs? highlighted a litany of social, environmental, economic and congestion problems arising from these newfangled housing developments: “Mile upon mile it sprawls, subdivision after subdivision, and…there is no sign it will stop,” the author groused. One expert in the article called the suburbs “a ghastly mess.”

Not much has changed in 65 years. People are still flocking to the suburbs. And the experts are still complaining about it. But after more than half a century, isn't it time to finally admit Canadians would simply rather live in the burbs and figure out how to make that happen?

Continue to read on: The Globe and Mail